How to make your self-care routine more sustainable

What does your Zodiac sign say about your self-love style? In June of 2018 Google released a set of 157 Android P beta 2 emojis with many re-designed options to promote inclusivity. The salad emoji, for example, previously contained a hard-boiled egg, whereas the new version was created sans animal products to “appeal to vegans.”

The head of design at Google Jennifer Daniel tweeted: 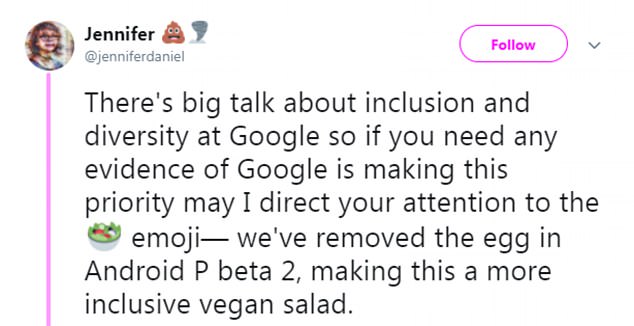 Google’s big news, however, may not be getting the reactions they hoped for, as their new salad emoji became the brunt of countless twitter jokes. The inclusivity came through when everyone decided to chime in to tell a joke.

Twitter user Antonis Panayi teased: “I’m offended by tomatoes, can you please make an emoji salad without them?”

Even vegans joined in on the jokes, with user Phil Rumney asking: “How did I ever cope seeing an emoji salad with an egg in it before Google made it more inclusive for me?!? Thanks, Google for saving me from those dastardly eggs.”

The jokes continued and other users pointed out they hadn’t even realized the emoji had an egg in the first place.

What do you think of Google’s efforts to make their emojis more inclusive?

10 Things Explained by GIFs That Only Vegans Understand 52 everyday reasons to be grateful Take our quiz and we’ll find you the perfect holiday sweater! What inspired our most popular holiday design EVER? An exclusive behind the scenes look