Minnesota Twins Stadium is a Home Run for Vegans Baseball season is in full swing! What better way to spend a summer afternoon than catching a ballgame, noshing on hot dogs and other iconic ballpark eats, and washing it all down with an ice cold beer?

Vegan baseball fans typically miss out on half the fun of going to a ballgame, but living off peanuts and Cracker Jacks for nine innings is slowly becoming a thing of the past.

Ballparks across the nation are adding veg-friendly noms to their concession stands. Most notable among these is Target Field, home of the Minnesota Twins.

According to People for the Ethical Treatment of Animals (PETA), Target Field is the most vegan-friendly ballpark in Major League Baseball (MLB). The Minneapolis-based stadium earned the number one spot on PETA’s 2018 Top 10 Vegan Friendly Ballparks list with its wide variety of vegan options, including cruelty-free burgers, burritos, tacos, pizza, and, of course, hot dogs.

A household name among Twin City vegans, The Herbivorous Butcher is exactly what it sounds like: a meatless butcher shop for vegans! The shop offers a rotating menu of cruelty-free meats and dairy-free cheeses at a brick-and-mortar store, a food truck, and, as of 2017, Target Field. Target Field is not the only ballpark meeting customer demand for plant-based options. Here are a few standouts on PETA’s Top 10 Vegan Friendly Ballparks list for 2018:

Vegan ballpark food is not limited to PETA’s Top 10 list. Sports fans can check for plant-based options at ballparks and other sports venues nationwide with Veggie Happy, a new vegan guide featuring 50 veg-friendly sports venues, their plant-based offerings, and where to find them. Vegan sports fans, play ball! 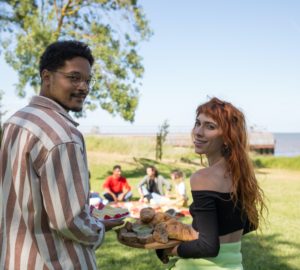